We made a 3 day trip to Bandera as our son Erik completed his first 100K (62 mile) trail race in the rugged Texas Hill Country. I have been around competitive running for quite a few years as we have watched his progress through high school/college track and cross country and now into “Ultra” endurance racing. Trail and mountain racing, which features incredible distances along with uneven terrain, rocks, boulders, and hill climbing is a completely different type of competition than road racing or cross country. Until you have seen it in person you can’t comprehend what a different challenge this is.

These shots give you a pretty good idea of some of the hills the runners have to climb but until you are on the trail climbing some of the sections you cannot imagine the steepness and difficulty.

The course is a loop of 50K/31 miles in which the runners make two laps. When we saw Erik at mile 22 he was in great shape after a relatively flat stretch but when we saw him again at mile 31 for the completion of the first lap he was nearly dead and I thought he was ready to tap out and call it a day. He had gone out too fast finishing the first 31 miles in 4 hours 45 minutes despite miles 22-31 nearly destroying him.  The chart below shows why as there are three killer climbs in this section where the runners are forced to walk, climb, or perhaps crawl their way to the top. Sections of the course and the hills have cute names like Big Nasty, Sky Island, and Ice Cream Hill – the race organizers seem to have a sense of humor!

As a spectator watching these races can be a bit challenging as much of it takes place in the hills which are covered with trees and the scale of the course is huge as the park has over 5,000 acres. I walked about 15 miles getting to various vantage points to see the runners but nevertheless I cannot wait to do it again and think I might want to take on one of these myself – perhaps the 25K to start!

I mentioned the terrain is uneven and you can an idea of what I mean in these photos as you see some of the rocks and boulders you are forced to deal with. I saw several runners who had slipped or fallen – making it around the course unscathed is nearly impossible.

As if the rocks and hills weren’t enough, the landscape is covered with the Sotol cactus which is a beautiful plant that just happens to have leaves that are as sharp as razor blades. Sections of the course are covered with these plants and many of the runners had cuts and blood dripping down their legs from an encounter. No one seemed to escape without being scraped up or cut.

The section below was ridiculous and a bit extreme –  That’s just not fair. 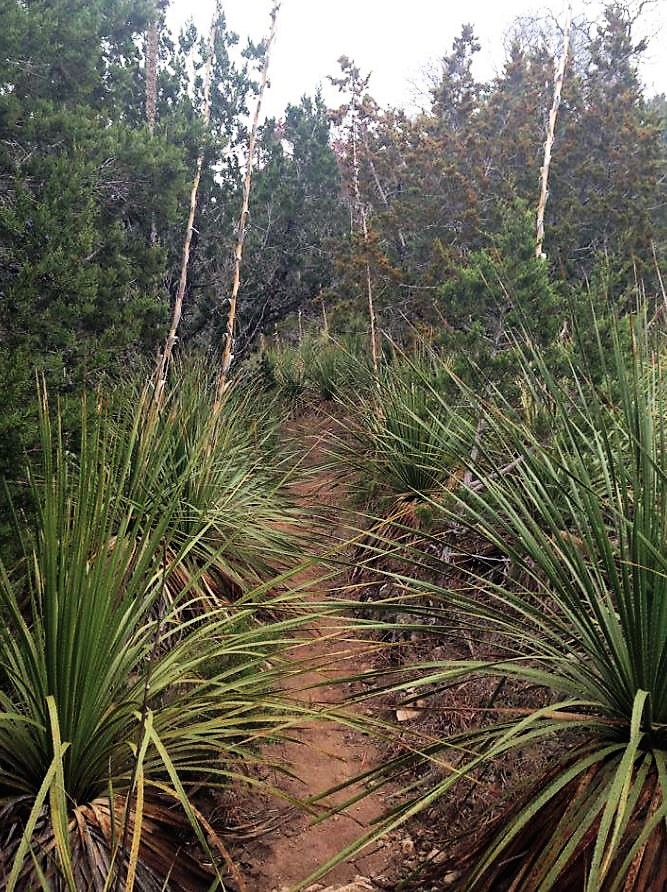 This photo was fairly early as Erik started running without a vest and just carrying a water bottle. Later he put on a vest to carry two water bottles as he found this easier to run with and felt he needed the extra hydration in addition to the aid stations they had a long the way. The runners have all sorts of styles and gear and I thought the photo below depicts that. The guy behind Erik is a regular at these events and runs in cargo pants and never takes additional water. I guess he needs an additional challenge.

After seeing Erik at the end of the first lap (mile 31) I did not think he could make it. He was delirious and laid down on the ground for a few minutes. Fortunately a friend paced him miles 31-40 and he seemed to settle into a slower rhythm that allowed him to finish. I caught up with him a few times on the second lap to give him encouragement. Despite having to make the previously mentioned hill climbs in the last 9 miles, in the dark with a head lamp, he somehow made it in with a strong finish down the home stretch.

He didn’t have much left in the tank after the race but finishing will be a great memory.

This site uses Akismet to reduce spam. Learn how your comment data is processed.